For inter-OX-communication over the network, multiple Open-Xchange servers can form a cluster. This brings different advantages regarding distribution and caching of volatile data, load balancing, scalability, fail-safety and robustness. Additionally, it provides the infratstructure for upcoming features of the Open-Xchange server. The clustering capabilities of the Open-Xchange server are mainly built up on Hazelcast, an open source clustering and highly scalable data distribution platform for Java. The following article provides an overview about the current featureset and configuration options.

Note: If you change the discovery package on yum-based distributions you need to remove the existing one with rpm -e --nodeps first. yum is not able to replace packages.

For single node installations, the configuration parameter can be left empty. If possible, one should prefer a static cluster discovery against the other possiblities, as it allows a new node starting up to directly join an existing cluster. However, probing for the other nodes could lead to a short delay when starting the server.

When enabled, the nodes publish and discover their services using Zero configuration networking in the mDNS multicast group. The services are prefixed with the cluster's name as configured in cluster.properties, meaning that all nodes that should form the cluster require to have the same cluster name. When using mDNS cluster discovery, nodes normally start up on their own, as no other nodes in the cluster are known during startup. Doing so, they logically form a cluster on their own. At a later stage, when other nodes have been discovered, nodes merge to a bigger cluster automatically, until finally the whole cluster is formed.

It should be configured to the same IP-address as used by Hazelcast, see hazelcast configuration below. Otherwise, cluster join requests might be targetted to the wrong network interface of the server and the cluster won't form.

The following list gives an overview about different features that were implemented using the new cluster capabilities.

Previously, when an Open-Xchange server was shutdown for maintenance, all user sessions that were bound to that machine were lost, i.e. the users needed to login again. With the distributed session storage, all sessions are backed by a distributed map in the cluster, so that they are no longer bound to a specific node in the cluster. When a node is shut down, the session data is still available in the cluster and can be accessed from the remaining nodes. The load-balancing techniques of the webserver then seamlessly routes the user session to another node, with no session expired errors. The distributed session storage comes with the package open-xchange-sessionstorage-hazelcast. It's recommended to install this optional package in all clustered environments with multiple groupware server nodes.

Depending on the cluster infrastructure, different backup-count configuration options might be set for the distributed session storage in the map configuration file sessions.properties in the hazelcast subdirectory:

The backupcount property configures the number of nodes with synchronized backups. Synchronized backups block operations until backups are successfully copied and acknowledgements are received. If 1 is set as the backup-count for example, then all entries of the map will be copied to another JVM for fail-safety. 0 means no backup. Any integer between 0 and 6. Default is 1, setting bigger than 6 has no effect.

The asyncbackup property configures the number of nodes with async backups. Async backups do not block operations and do not require acknowledgements. 0 means no backup. Any integer between 0 and 6. Default is 0, setting bigger than 6 has no effect.

Since session data is backed up by default continously by multiple nodes in the cluster, the steps described in Session_Migration to trigger session mirgration to other nodes explicitly is obsolete and no longer needed with the distributed session storage.

Normally, sessions in the distributed storages are not evicted automatically, but are only removed when they're also removed from the session handler, either due to a logout operation or when exceeding the long-term session lifetime as configured by com.openexchange.sessiond.sessionLongLifeTime in sessiond.properties. Under certain circumstances, i.e. the session is no longer accessed by the client and the OX node hosting the session in it's long-life container being shutdown, the remove operation from the distributed storage might not be triggered. Therefore, additionaly a maximum idle time of map-entries can be configured for the distributed sessions map via

To avoid unnecessary eviction, the value should be higher than the configured com.openexchange.sessiond.sessionLongLifeTime in sessiond.properties.

Groupware data is indexed in the background to yield faster search results. See the article on the Indexing Bundle for more.

For faster access, groupware data is held in different caches by the server. Formerly, the caches utilized the TCP Lateral Auxiliary Cache plug in (LTCP) for the underlying JCS caches to broadcast puts and removals to caches on other OX nodes in the cluster. This could potentially lead to problems when remote invalidation was not working reliably due to network discovery problems. As an alternative, remote cache invalidation can also be performed using reliable publish/subscribe events built up on Hazelcast topics. This can be configured in the cache.properties configuration file, where the 'eventInvalidation' property can either be set to 'false' for the legacy behavior or 'true' for the new mechanism:

All nodes participating in the cluster should be configured equally.

In the Open-Xchange server Java process, the MBeans com.hazelcast and com.openexchange.hazelcast can be used to monitor and manage different aspects of the underlying Hazelcast cluster. Merely for test purposes, the com.openexchange.hazelcast MBean can be used for manually changing the configured cluster members, i.e. the list of possible OX nodes in the cluster. The com.hazelcast MBean provides detailed information about the cluster configuration and distributed data structures.

When experiencing hazelcast related errors in the logfiles, most likely different versions of the packages are installed, leading to different message formats that can't be understood by nodes using another version. Examples for such errors are exceptions in hazelcast components regarding (de)serialization or other message processing. This may happen when performing a consecutive update of all nodes in the cluster, where temporarily nodes with a heterogeneous setup try to communicate with each other. If the errors don't disappear after all nodes in the cluster have been update to the same package versions, it might be necessary to shutdown the cluster completely, so that all distributed data is cleared.

The Hazelcast based clustering features can be disabled with the following property changes:

As hazelcast will be used by default for the distribution of sessions starting 6.22.2 you have to adjust hazelcast according to our old cache configuration. First of all it's important that you install the open-xchange-sessionstorage-hazelcast package. This package will add the binding between hazelcast and the internal session management. Next you have to set a cluster name to the cluster.properties file (see #Cluster Discovery Errors). Furthermore you will have to add one of the two discovery modes mentioned in #Cluster Discovery.

Running a cluster means built-in failover on the one hand, but might require some attention when it comes to the point of upgrading the services on all nodes in the cluster. This chapter gives an overview about general concepts and hints for silent updates of the cluster.

While in most cases a seamless, rolling upgrade of all nodes in the cluster is possible, there may be situations where nodes running a newer version of the Open-Xchange Server are not able to communicate with older nodes in the cluster, i.e. can't access distributed data or consume incompatible event notifications - especially, when the underlying Hazelcast library is part of the update, which does not support this scenario at the moment. In such cases, the release notes will contain corresponding information, so please have a look there before applying an update.

Additionally, there may always be some kind of race conditions during an update, i.e. client requests that can't be completed successfully or internal events not being deliverd to all nodes in the cluster. That's why the following information should only serve as a best-practices guide to minimize the impact of upgrades to the user experience.

Upgrading all nodes in the cluster should usually be done sequentially, i.o.w. one node after the other. This means that during the upgrade of one node, the node is temporarily disconnected from the other nodes in the cluster, and will join the cluster again after the update is completed. From the backend perspective, this is as easy as stopping the open-xchange service. other nodes in the cluster will recognize the disconnected node and start to repartition the shared cluster data automatically. But wait a minute - doing so would potentially lead to the webserver not registering the node being stopped immediately, resulting in temporary errors for currently logged in users until they are routed to another machine in the cluster. That's why it's good practice to tell the webserver's load balancer that the node should no longer fulfill incoming requests. The Apache Balancer Manager is an excellent tool for this (module mod_status). Look at the screen shot. Every node can be put into a disabled mode. Further requests will the redirected to other nodes in the cluster: 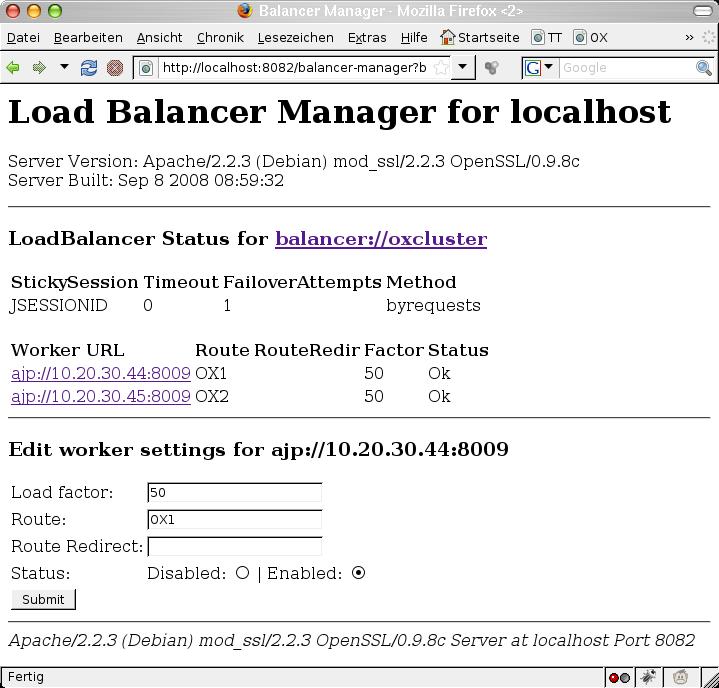 Afterwards, the open-xchange service on the disabled node can be stopped by executing:

Now, the node is effectively in maintenance mode and any updates can take place. One could now verify the changed cluster infrastructure by accessing the Hazelcast MBeans either via JMX or the showruntimestats -c commandline tool (see above for details). There, the shut down node should no longer appear in the 'Member' section (com.hazelcast:type=Member).

When all upgrades are processed, the node open-xchange service can be started again by executing:

As stated above, depending on the chosen cluster discovery mechanism, it might take some time until the node joins the cluster again. When using static cluster discovery, it will join the existing cluster usually directly during serivce startup, i.o.w. before other depending OSGi services are started. Otherwise, there might also be situations where the node cannot join the cluster directly, for example when there were no mDNS advertisments for other nodes in the cluster received yet. Then, it can take some additional time until the node finally joins the cluster. During startup of the node, you can observe the JMX console or the output of showruntimestats -c (com.hazelcast:type=Member) of another node in the cluster to verify when the node has joined.

After the node has joined, distributed data is re-partioned automatically, and the node is ready to server incoming requests again - so now the node can finally be enabled again in the load balancer configuration of the webserver. Afterwards, the next node in the cluster can be upgraded using the same procedure, until all nodes were processed.